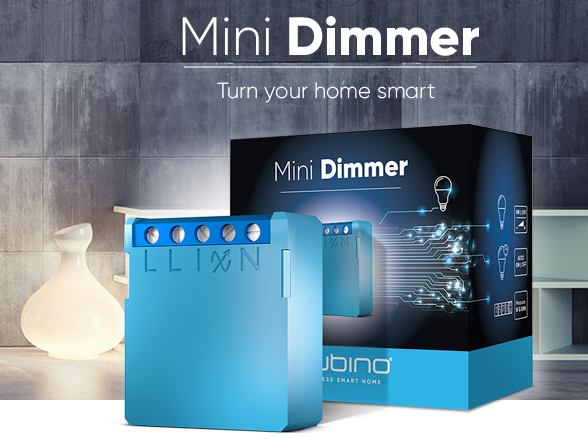 Qubino Mini Dimmer - Coming Soon!
It was young Foster Sylvers back in 1973 who sang "Big things come in small packages". His album only made it to number 159 in the US Charts back then, which most would agree, is none too influential. But unlike his self-titled album, we expect the Qubino Mini Dimmer to rise straight to the top of the Home Automation Charts!

The Qubino Mini Dimmer is 25% smaller than any other wireless dimmer in the world. Don't let it's size fool you though, as this module packs a punch.

It is made to work with all types of dimmable bulbs, including incandescent, halogen, LED, LED Strip and Fluorescent. It is Z-Wave certified and compatible with ALL Z-Wave certified gateways worldwide. That includes both Vera and Fibaro gateways. What's more is that it can act as either a Dimmer or a Switch, both with or without neutral, with the module appearing as a switch in the gateway's user interface.

For those who do not have neutral at the switch, the Qubino Mini Dimmer can be wired in both a 2-wire (no neutral) and 3-wire (with neutral) set up. In a 3-wire (with neutral) configuration it can work with loads as low as 2W. In a 2-wire (no neutral) configuration, the minimum load is a tiny 25W! That is without a bypass module attached! However if you need go below this already low number, use any standard bypass and loads below 5W are achievable. This is completely unique to any other dimmer on the market at the moment, and something we are really excited about!

And if that is still not enough, the Qubino Mini Dimmer also comes with industry leading S2 level security as standard. There is a status light built into the module which uses RGB LED lights to signify it's status (inclusion/exclusion, overheating etc.) and consumes only 0.4W making it not only the smallest dimmer but also the most efficient. The packaging is 100% plastic free and uses recyclable carton materials. This is one eco-conscious device!

Certification for the Australian market is well underway and we expect this gem to become available to us before Christmas this year. What a gift that will be!